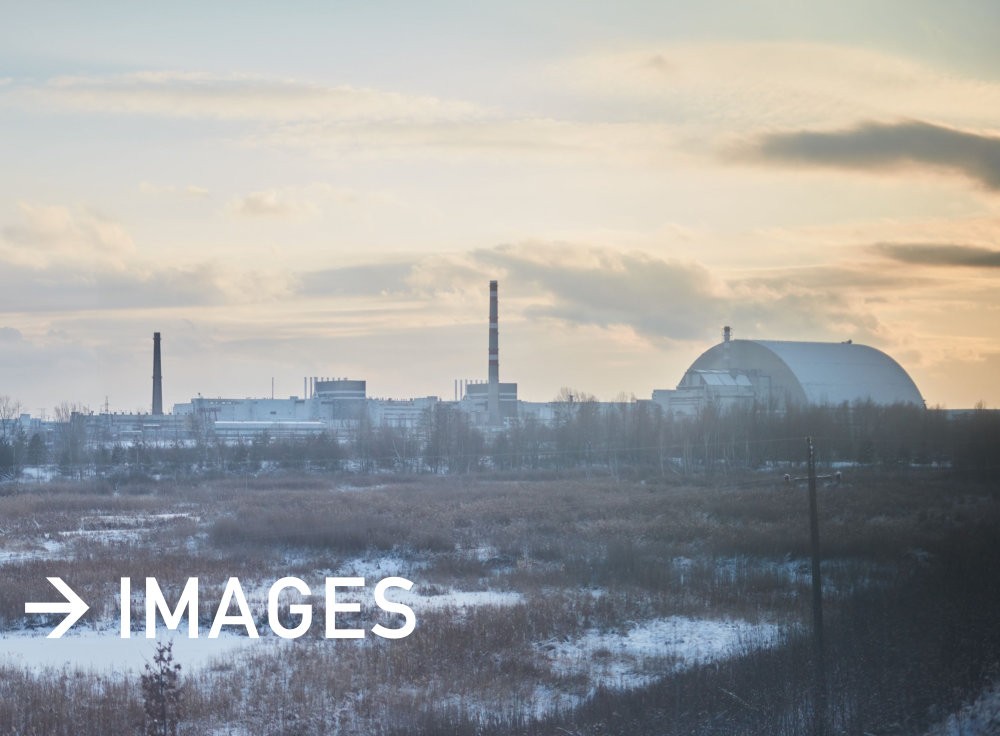 “Do you want your book to tell the truth? Are you going to visit Chernobyl as well?” I was asked this by a member of the German Atomic Forum, of all people. He’s almost the only person who asked me that question. There are plenty of pictures of Chernobyl. Everyone above a certain age knows the aerial photo of the exploded reactor, and the images of the sarcophagus built around it. Millions of press photos have gone around the world over the years. In 2003 Robert Polidori published his illustrated book “Zones of Exclusion”, a pioneering collection of outstanding photos that captures the power plant and the surrounding area. Since then, countless other photographers have visited the site to document many different aspects of the Exclusion Zone. In 2014, Gerd Ludwig painted an even more comprehensive picture, including the faces of the people affected, in  his volume “The Long Shadow of Chernobyl”. The Zone and in particular the former nuclear town of Pripyat have since become leading tourist attractions. The internet is full of shots of the rusting Ferris wheel, decaying buildings, peeling paint and abandoned children’s toys. There is nothing new that I could have shown, and pictures taken on a flying visit might have seemed self-indulgent. But I had to go anyway. The man from the Atomic Forum was right: a history of nuclear power that omits the Chernobyl disaster would not be telling the whole truth.

As expected, it takes some time, but in the end I manage to get a special permit from the Exclusion Zone authorities to visit the remains of the power plant. By February 2018 the time has come. An aging regional train takes me from Kiev to Slavutych. The overhead line is iced up. During the four-hour journey the train lights up the night with ghostly turquoise flashes, which have become rare in Germany’s warmer winters. Slavutych is the replacement for the abandoned town of Pripyat, built swiftly in 1988 to house site workers and liquidators. Different Soviet republics were responsible for the construction of different districts of the country’s last planned city, which accounts for an architectural pattern that is as varied as it is interesting. The town is only two-thirds completed, and in a state of stagnation. I am greeted at the station by the sight of an unfinished building. Those buildings that have been completed, however, look modern and are in good shape, paths are designed more for pedestrians than for cars, and the snow-covered, partly tree-lined inner city looks like a socialist utopia.

Next morning we head into the Zone itself. The train, crammed with workers, crosses the icy Dniepr river and travels across a Belarusian section of the closed area. Here and there, decaying buildings are visible in the snowy landscape. Then the familiar outlines appear, the unfinished Blocks 5 and 6 as well as a long structure, at the end of which stands the ill-fated reactor entombed in its new sarcophagus. After crossing the wide Pripyat river we arrive at the power station: workers are waiting in queues, identity card checks and radiation protection procedures follow. All signs are written in both Ukrainian and Russian. Whereas in the public spaces of Kiev, the Russian language has been largely replaced by English and hostility towards Russia is visible everywhere, here a more cooperative spirit exists. My supervisor is shown my approved programme. Up until that point, it hasn’t been clear what I will actually be allowed to see. We enter the complex, whose interior design surprises me. The administrative wing, dating from the 1990s, features laminate flooring, and domestic-style interior doors with lattice windows and matching curtains. In the control area changing room, beside a row of grey lockers, hangs an oval hall mirror framed by a wrought iron wreath. The walls of the corridors are covered with patterned kitchen tiles. Other details are also more in keeping with a domestic setting.

We get changed, and before long we are looking like members of a cooking crew, dressed in white uniforms and caps. We pass through an endless gold-coloured corridor running alongside all the units of the plant, laid with coloured aluminium panels, then up and down stairwells and through side passages. The floor is sometimes covered with thick silicone strips, which curve up to the walls. Over the decades, the flooring has become scuffed to a brownish-yellow hue, and the stairs have acquired a slippery feel. Eventually we enter the reactor hall of Unit 3, which was in operation until the end of 2000: a long shoebox 10 storeys high with yellow-green walls and a worn stainless steel floor. We see the biological shield of the reactor, a pixelated metallic disc that we can walk around on. In the corner stands the complex refuelling machine, the pride of Soviet engineering, which was used to change the fuel cassettes during operation. The hall looks like it has been stripped bare, and feels cool. We also visit the main circulation pumps, yellow cylinders rising six metres out of the ground, and the control room of Block 3. The control desks form a grey semicircle, featuring displays and panels that would not look out of place on a Galactic Empire battlecruiser, while the natural stone flooring would be more suited to a Mediterranean sun terrace. My supervisor shows me roughly which dials and indicators perform which functions, and then the button that activates the insertion of the control rods, the procedure which triggered the disaster in Unit 4. All emergency controls are shielded under hinged lids that are locked in place with wax seals. A red telephone stands on a side table.

In the corridor I don’t notice that we have moved into Unit 4. We pass through a side door, and then we’re already standing in the ill-fated control room, or at least what remains of it. The coverings on floor and ceiling have been removed, the passageway leading past has been closed off and a new corridor has been laid along the rear part of the room, which now ends just behind the remaining desks at an unpainted grey wall. Fluorescent tubes on the wall bathe the room in a pale, homogeneous glow. The desks and wall fittings are rusty, paint-spattered, covered in dust. Knobs and switches are mostly missing. Traces of the pink decontamination coating can still be made out, albeit with some effort. The place has all the appeal of a basement boiler room equipped with old pinball machines. It’s hard to believe that I’m standing right where the disaster unfolded, just a stone’s throw away from the molten core itself. I look at the ransacked instrumentation panels and mutter the word “tourists”. My supervisor looks at me. “No, no tourists. Only very few people from outside come here.” The elements were used as spare parts. Hidden behind the old  instrumentation panels are brand new displays. The control room is a control room once again, this time monitoring the sensors inside the sarcophagus. Would I like to have a photo of myself? I decline politely . My dosimeter beeps: one microsievert, almost nothing.

We also visit official memorials and take a close look at the new sarcophagus, the so-called New Safe Confinement. The double-walled stainless steel hall is 108 metres high, exactly the same as the former Zeppelin hangar near Berlin, which today houses a tropical recreation area. Next to the power plant is a kilometre-long array of switchyards with towering lightning conductors. Strangely shaped pylons support the power lines. A Tarkovsky landscape. In the distance we can see the reception antenna of the Duga-1 ionospheric radar system, a nuclear attack early warning system stemming from the Cold War. The structure is 150 metres high and half a kilometre wide. Only recently another ‘stalker’ fell to his death there; not the first and certainly not the last victim of the Zone. In 2005, the WHO put the number of deaths due to the effects of radiation at about 4000, roughly half of them former liquidators. The numbers seem so absurdly understated to the officials here that my guide can only give a dry laugh. He also shows me a whole collection of buttons and badges, including a Liquidator’s Medal, which depicts a drop of blood at the centre, together with the symbols for alpha, beta and gamma radiation. At the flea market in Kiev you can buy one for a few euros.

We leave the Zone again by train. The evening sun turns the sky orange, bathing the snowy landscape and sarcophagus beyond the misted-up windows in an oddly nostalgic light.