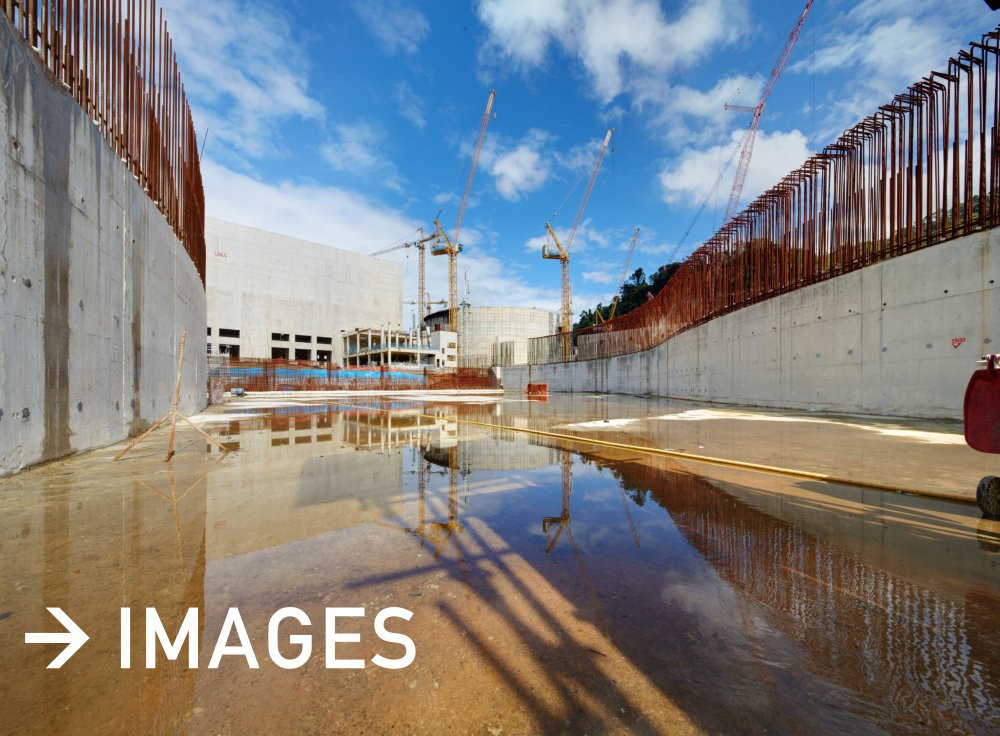 Surprisingly, it was possible for me to photograph for this book a German nuclear power plant that was still under construction, and without having to use a time machine. After many years of planning and preparatory work, in 1981 work began in Brazil on building a Siemens pressurised water reactor. In 1985, the country bought all the equipment for another unit. The idyllic Angra site on the Atlantic coast was already home to a smaller Westinghouse nuclear station. However, the construction of the first German plant, Angra-2, took until the year 2000; the components for the second unit were meanwhile placed in storage. Eventually, in 2010, construction began on Angra-3, a sister plant of the Grafenrheinfeld power plant. After several inquiries via three different channels I get permission to take some pictures, but this is suddenly at risk of being withdrawn two days before my departure. “I hope you haven’t already booked a flight,” says a voice at the other end of the line. With a little last-minute diplomacy and the goodwill of those involved, everything works out in the end. I am allowed to visit the construction site for several days, given a berth in the engineers’ barracks and, after a friendly intercession, also make a tour through Unit 2 while it’s in operation.

Angra has an astounding beauty. The power station is situated on the Atlantic coast between Rio de Janeiro and São Paulo, and the picturesque mountains plunge into the sea just like in Rio. Just off the coast is the Ilha Grande, one of Brazil’s most beautiful islands and a prime tourist attraction. But the power station is just as exceptional: the powerhouse, reactor auxiliary and switchgear buildings are painted in warm pastel colours and feature ribbed, rounded façade elements that almost give everything an art deco feel. The reactor dome, on the other hand, has a white lacquer coating. In the evenings the tropical sunset reflects off the dome and sea alike, and the scene, shrouded in palm trees, looks like a kitschy airbrushed poster from the 1980s. On one such evening I look out from a vantage point; the sky is orange and violet. “That’s my installation,” says a senior engineer standing next to me, with some satisfaction.

At this point, Angra-3 is in an advanced stage of shell construction. The power house is already finished, the reactor building is only missing its dome. The lower hemisphere of the containment is ready, in the centre of which the reactor’s biological shield is being built. Elsewhere, large pieces of shell for the second part of the sphere are being pivoted around by a crane, while construction workers inspect the upper pole cap under a tent. I’m allowed to move relatively freely. We can also enter the inlet and outlet structures for the cooling water, which are still open and uncovered but will be placed underground at a later stage. The roof of the power house is also accessible, which gives a good overview. The surroundings are spectacular, but the landscape of the construction site is anything but bustling or hectic. People greet each other with a thumbs up, which at times even gets you through security, and things are generally relaxed. But Angra-3 also has funding problems and other difficulties, which means that construction is sometimes slow or even comes to a standstill. On the other hand, keeping a major construction site – people and equipment alike – going for years on end in tropical conditions is no mean feat. Another problem is the material. The technical equipment has been in storage since the 1980s, but various elements have been “cannibalised”, in other words used as replacement parts for the already operating Unit 2, and have to be procured again. In addition, there are complaints are about some pipes that have just been delivered. “You could use those for food processing, but not for nuclear power!”, someone says. “They need to get back up to the quality standards we expect.”

Construction is also taking place in the cool north of Europe, where a pressurised EPR water reactor, OL-3, is being built at Olkiluoto in Finland. Nuclear engineering is often a matter of learning by doing, and the scarcity of new power plant construction sites has also contributed to many delays in Finland. This EPR is the successor to both the German Konvoi and the French N4 power plants, and virtually the last generation of power plant to feature German technology. Getting a permit for a photo visit here is far trickier. The construction costs for OL-3 have multiplied, and the manufacturer, Areva, and the Finnish utility TVO are in litigation. After several years, and with the support of TVO and Areva Germany, I am given the green light. Meanwhile, construction has almost been completed, and the plant is in the process of being commissioned. On site, however, I first have to sign a restrictive five-way non-disclosure agreement with TVO, Siemens, Areva France and Areva Germany as parties.

Appearance has been very important in Olkiluoto, much more so than at the plants in Germany or other EPRs in France or China. The first two units feature the red colour of traditional Nordic country houses, with white “corner posts”. Unit 3 also adopts red as its basic colour, but the cylindrical reactor building is clad in aluminium, like a classic 1960s-era German research reactor. Apart from the shell, the complexity is surprising. Compared to German facilities, there are many more corridors, rooms, stairs, intersections and doors for which you first have to get the keys. The journey from the reactor to the structurally segregated cooling pond seems to take an hour. In the corridors, workers are meticulously painting pipes, under the reactor the core catcher is inspected, and French and Finnish specialists are testing the systems in the asymmetrically designed control room. Siemens is responsible for the power house, and completed it some time ago. The rotors of the world’s most powerful turbine are standing around the hall, shrouded in white, waiting for deployment. Most interesting is of course the reactor section. The geometry of the reactor hall is similar to that of other Siemens power plants, but the steam generators are much taller. The material lock also appears gigantic. Almost all of the components – the lid of the reactor pressure vessel, the reactor basin, the steam generators in their housings – are wrapped in bluish plastic tarpaulins, but here and there, some things are exposed. The metre-thick armoured doors to the closed area around the reactor are open to me, some parts of the primary circuit are visible – stainless steel pipes as thick as a tree, from which one will keep one’s distance later, when the plant is in operation. The reactor is also open, as the loading machine has just been tested. There’s even a dummy fuel element in the reactor. I am only allowed to shoot this from the steam generator; the better view from the loading machine is off limits. When I’m allowed to go on it later on, everything is covered with plastic sheeting again. But it makes no difference in the end, as the pictures I have taken in that part of the site are all censored afterwards.

The images are subsequently examined by several legal departments which, presumably on account of the ongoing legal dispute and critical public opinion, do not want to release anything, not even the pictures taken on the terrace of the public visitor centre. After some German-Finnish diplomacy, however, a few photographs have eventually been able to make their way into this book.