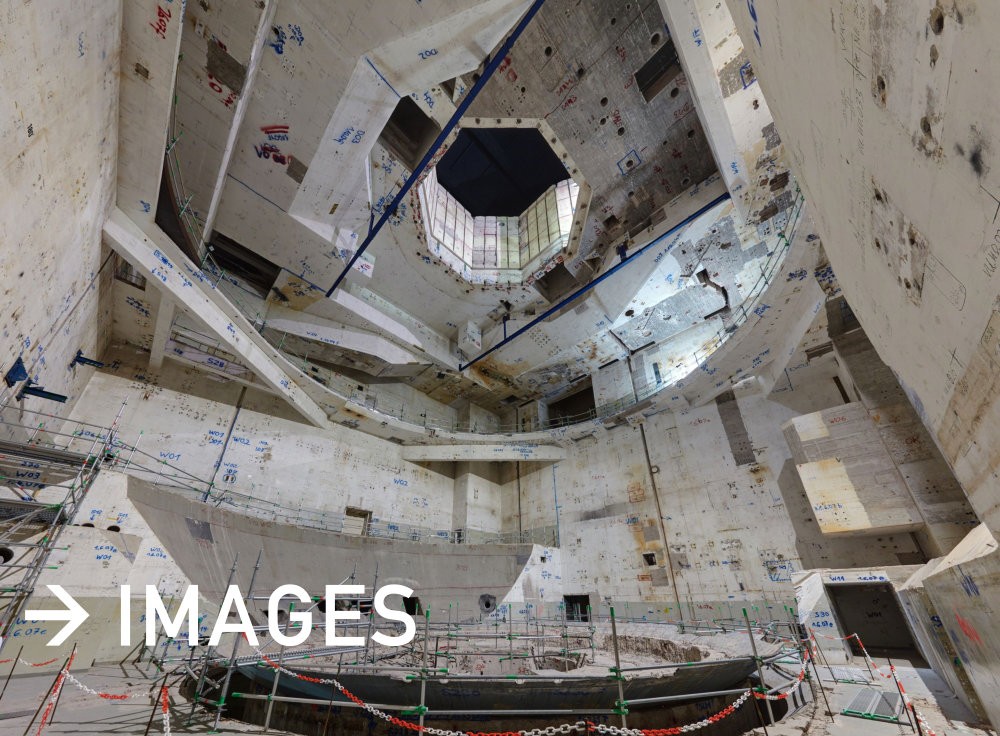 Nuclear power plants that are being decommissioned have an air of melancholy. Even if the process of decommissioning takes decades, and the task is often more exciting than many other lines of work, these are places that have lost their original purpose, and the aim of all the work being done there is to make the workplace itself disappear. Staff numbers decline; consoles lose their aura of control as switches that controlled long-dismantled components are replaced by plastic tiles that do nothing; a power indicator displaying zero is even adorned with a black ribbon showing its switch-off date. Photos of the blue glowing reactor core turn yellow on the wall. Trophies won by long-disbanded company football teams gather dust on the shelves.

Switch-off heralds the start of a post-operational phase that lasts for several years, during which time the fuel elements decay and are finally removed. Much appears as it was before, but the atmosphere feels more relaxed than when the plant was still fully operational. Later on, dismantling either begins or the building is sealed off and the long wait begins until activity has significantly decreased. The former thorium high-temperature reactor (THTR) near Hamm in western Germany is in such a „safe confinement“ state. When I visit the plant, only three employees are left. The power plant itself only operated for a few years, and looks like a hi-tech version of Sleeping Beauty‘s castle. Thick, severed power cables can be seen protruding from the wall on the outside. Inside, everything looks brand new. We are able to circle the cylindrical reactor at multiple levels. Walls are adorned from floor to ceiling with a maze of fine stainless steel pipes and measuring displays. Instruments bear the insignia of manufacturers that no longer exist. On one central level we find a scale model of the reactor, elaborately made of graphite; nearby is another, a huge plastic replica of the plant, made before the advent of CAD. Lighting is provided by a row of small grille-covered basement lamps and a power cable with signs every few metres asking that it not be cut. In contrast, all supply lines to the reactor are separated and sealed, as are, in the hall above the core, the steam generators that once towered above it. A 100-ton crane is suspended from the hall ceiling, like new, its glass cockpit accessible only with difficulty by means of numerous ladders. When was the last time anyone sat up there? The changing areas have already been cut off from the power supply. We enter them with the aid of a flashlight: clean, new-looking rooms painted in the light shade of beige that was in vogue in the early 1980s; lots of stainless steel, reminiscent of a swimming pool by night. The expensive insides of the full-body scanners have been gutted and sold, everything else is still here. „Look,“ my supervisor says after a searching around for a moment, pointing to the label above a coat-hook. „This one was mine.“

A nuclear power plant consists primarily of mountains of concrete and steel. Only a very small part of it actually becomes radioactive during operation. This means that during the decommissioning process it is important to separate as much uncontaminated material as possible. For example, potentially contaminated layers of paint are chiselled off the walls, and most components are dismantled and then blast-cleaned. In the end, everything has to be made free of radiation and placed in so-called grid boxes, which then pass through a measuring station: an entire power station inventory, dismantled into an endless chain of parcel-sized packages. The chiselled-off walls, on the other hand, are divided into fields by means of crosses, like the old photos of the moon landings, and the residual radiation level is noted across each field. In the course of this process, more and more operational functionality is lost. At the Mülheim-Kärlich power plant in western Germany, the heavyweight hatches of the former manlock have been replaced by a fire door. At the Stade power plant in northern Germany, there are no doors left at all. The containment unit is still there, but inside there is almost nothing but chiselled walls and blast-cleaned steel. Stade was the second of the last 18 pressurised water reactors built by Siemens. It is astonishing to see that the plant‘s annular space and many structural details closely resemble those in the carcass of Angra-3 in Brazil, which might eventually be commissioned 50 years after Stade. At the Würgassen power station in central Germany, nuclear dismantling has already been completed. Instead of a containment unit, the building houses a large, spherical cavity. A friend showed me some photos she had taken with her mobile phone when she visited the site: offices and rooms that looked like they had been abruptly abandoned after years of operation, potted plants that had grown out of control, wrapping themselves around windows for decades before finally drying up – scenes like a German version of Pripyat. Shortly before my own visit the site had been cleared out, so that the images I took have a calmer, less sensationalist look about them. The warehouse is home to sacks full of expensive sample jars which will soon end up in the glass recycling, and a small cardboard box containing old punch-cards. They hold microfilms of the plant‘s construction plans; the device for viewing them no longer exists.

The final stage of decommissioning involves conventional demolition. Few people know that the largest site of this kind is near Stendal, in the former East Germany. The GDR had planned four large VVER-type units with a total output of 4 gigawatts. By the time of German reunification, the first one was 75 percent finished, and the second was half-constructed. It was briefly planned to complete both units with Western control technology, but the idea was soon dropped. The demolition of the remaining buildings has been under way for many years now. With a little effort I am able to find the person responsible for the dismantling process. I am allowed to visit the site, but don‘t expect to see very much left. When I arrive on one of the few buses that make the long journey from the town of Stendal, I find a large area whose surface consists of a layer of fresh, flat-rolled concrete rubble. Here and there I can make out steamrollered reinforcing iron bars. A small house dating from the 1970s is on one side. This is where I meet the person in charge. He is just taking his tomato crop inside. Next to the house are some demolition vehicles. It looks as if two, maybe three people are in the process of tearing down almost single-handedly what was once the largest building shell in East Germany, put there by tens of thousands of construction workers. Basements filled with luminous green water are all that remains of the emergency diesel power buildings. Further off I can see a small flat structure. As I get closer, I realise that this is the stump of Unit A, still 12 metres high. Weirdly bent steel reinforcements protrude from the demolished edges of the metre-thick concrete floors. Inside, the paint is peeling away from the ceiling of the building.

Occasionally I come across disused facilities that have been given a new lease of life. For example, the SNR 300 fast breeder at Kalkar, near Düsseldorf, has been turned into an amusement park. The former control room, now lined with a thick green carpet, has been turned into a conference hall. Small, half-timbered houses have been built next to the outer walls, and the cooling tower now houses a swing ride. I even discover a blue bottle containing a brand of schnapps called “Reaktorgeist” (“reactor spirit”). The normal aim of dismantling, however, is to recreate a greenfield site. The resulting space is not always used; the disappearance of the building is sometimes an end in itself. This is the case at Niederaichbach in southeast Germany, where a memorial stone marks the site of a former nuclear power plant. After an expensive demolition process, the area now serves as pasture. In Stade I had to flee from a gang of domineering ruminants, which did not go uncommented: „Yes, cows are always the greatest hazard you‘ll find at a nuclear power plants“. Here, at the memorial stone, this is actually true.