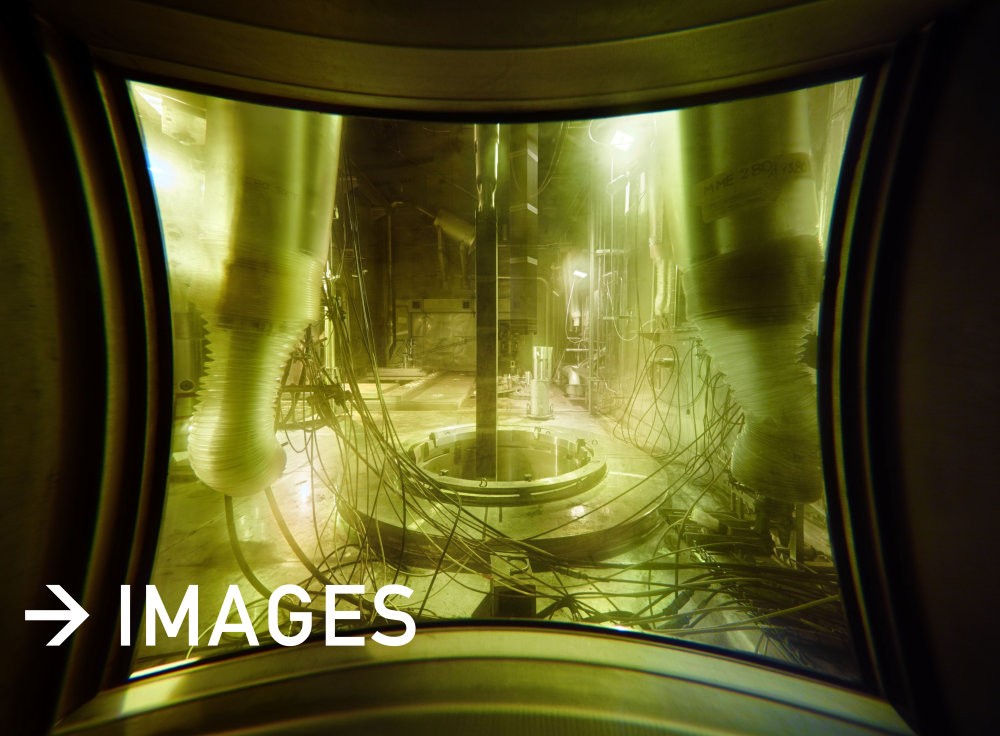 After a few years in the storage pool, the spent fuel rods have decayed sufficiently for them to go into dry storage. Every few years there is a so-called “Castor” campaign. The loading of a Castor dry storage cask has to be done manually, at least at pressurised water reactors. Next to the spent fuel pool and out of reach of the loading machine, there is another basin for the cask. To transfer the spent fuel, a long rod is attached to a large overhead crane. This is used to pick up the fuel elements and drive them through a narrow gap into the extra pool, where the positioning of the rod is then fine-tuned by hand above the matching slot in the storage cask. When the reactor is unloaded, the gripper arm of the loading machine pulls the elements into a shielded tube. In contrast, here they can be seen up close – a somewhat dubious pleasure.

After loading, the storage container must be thoroughly dried, which can sometimes take up to 100 hours. I am able to photograph this process, hastily and from a distance, while the attendants wait behind a protective lead wall. Then the radiation safety officer comes to me. “You want to touch it?” Uneasily I reach for a cooling fin on the container. It is surprisingly warm, over 60 degrees Celsius. If the “residual moisture test” after drying is passed, the container is transferred to the adjacent interim storage facility. These “on-site interim storage facilities” are long, grey concrete halls. At the front there is a smaller reception area, behind a wall, then the storage space, at the end of which the blue cylinders, each six metres high, are lined up. Close up they look like the forests of thick columns you find inside Egyptian temples. A freshly loaded Castor can produce as much heat as 70 hotplates, so the hall is ventilated and kept uniformly cool. But if you walk between the rows of columns, you can feel the heat radiation on your skin – like a night-time campfire. The containers will likely remain there for decades until they are placed in a final repository.

Reprocessing was part of the dream of unlimited energy. Fissionable U-235 is a scarce and expensive resource. Uranium comprises 99 percent non-fissile U-238. The idea was to use breeder reactors to convert as much of it as possible into fissile plutonium. Even ordinary fuel rods contain up to 95 percent U-238, and thus some plutonium is also produced in an ordinary reactor. All of this can be extracted in a reprocessing plant, which, if implemented on a large scale, could multiply the energy reserves by orders of magnitude. Diagrams show a cycle in which unused U-235 and incubated plutonium are extracted from burnt elements and processed to form new fuel, mixed oxide. The basis of this is the Purex process (“Plutonium-Uranium-Reduction-Extraction”) which was developed for the Bomb, though it only works with burnt uranium oxide, not with mixed oxide, meaning the repeatable cycle becomes just a one-time loop. Apart from the nuclear powers, only two countries have developed the capacity to do this: Japan and Germany. In Germany, the technology was tested for decades at the Karlsruhe Nuclear Research Centre, but planned large-scale implementation at Kalkar, Gorleben and Wackersdorf was dropped in the face of public opposition.

Instead, German fuel elements were reprocessed abroad for many years – at Sellafield in England as well as La Hague in France. The latter opens its doors to me. La Hague is a complex covering more than two square kilometres and has been in operation since the mid-1960s. The individual blocks originate from different periods, but some of them obviously date back to the beginning. I quickly give up trying to keep my bearings, and follow my guide through the various units. First, incoming containers are unloaded. The control room here could have featured in a French space comic of the 1970s. The process itself takes place inside a large “hot cell”, a chamber lined with stainless steel and shielded by metre-thick concrete walls, brightly lit by orange sodium vapour lamps. This is surrounded by a darkened room for the operators, and several 1.20 metre-thick windows that allow a view inside the cell. Inside, a gripper arm pulls the fuel elements out of their container. They are turned in all directions and checked for integrity. Then they are put into transport baskets and placed in an strikingly large blue storage basin, which is already well filled. I don’t get to see the following steps, which are rather unpleasant for humans to be near to: the cutting of the fuel elements, their dissolving in hot nitric acid and the subsequent passage through the Purex process inside the plant’s “canyon”, a long, shielded structure. To monitor the process, samples are constantly taken and sent to a laboratory for analysis. Windowless rooms house hot cells with slit-like lead glass windows and a few scientists. It’s just us. “Want to see our plasma torch?”, I’m asked. “It’s 10,000 Kelvin!” Impressed, I look at the torches and ceramic sample carriers, while the spectroscopic procedures are explained to me. The waste product of the processing is a kind of soup of highly radioactive and toxic elements which are then encased in glass. La Hague has two vitrification plants, which I am allowed to look at. The operational rooms are long, narrow and several floors high. One side adjoins the equally high cell housing the vitrification machinery. The wall is dotted with numerous windows fitted with pairs of manipulators, split over three or four levels and accessible via metal staircases and platforms. During operation the room is dimmed, and the dark green background lighting makes the orange windows appear all the brighter. The hot glass is filled into so-called coquilles, robust stainless steel bottles that which are then weld-sealed and stored until they are taken back to where the waste originally came from.

Some reprocessing did also take place in Germany. The Karlsruhe reprocessing plant was used as a pilot plant for the planned large-scale installation at Wackersdorf. Some 208 tonnes of fuel elements were processed, resulting in 80 cubic metres of highly radioactive liquid waste. A separate vitrification plant was developed and built for this waste, and was in operation from 2005 to 2010 for just this one batch. Since then, it has been decaying, and it will at some point be dismantled. Compared to its counterpart in La Hague, everything here looks ultra-modern and clinically clean. The Wackersdorf site is completely unused from a nuclear perspective. Part of it is now a BMW plant. The entrance area that was originally intended for fuel elements is secured with metre-thick walls to protect it against aircraft impact. The large overhead crane is walled in. At the time of my visit this vast chamber was being used as a storage facility.

All nuclear waste ends up underground. There are two controversial repositories for low- and intermediate-level radioactive waste in Germany, at Morsleben and Asse. A third, the Konrad shaft, is being built inside a former iron ore mine near Salzgitter, in central Germany. All three have one thing in common: they are former mines. People greet each other with the traditional collier’s motto “Glückauf” (“best of luck!”), and in each you’ll find a shrine housing a small statue of Barbara, the patron saint of miners. While I’m underground I think less of the nuclear waste nearby than of the fact that I am in a narrow tube beneath 700 or 1100 metres of rock. In the Konrad shaft, the aim is to improve on the older two repositories. A thousand metres underground, access roads are being built that are as good as any road tunnel that passes under the Alps. The familiar yellow waste barrels will be packed tightly together and cast into concrete blocks from which no detectible radiation can escape. These will then be stacked on top of each other in the final storage chambers, after which any remaining gaps are also filled in with concrete. The effort seems colossal considering the predominantly low levels of radioactivity. Yet on the surface, yellow-painted barrels by the roadside are a ubiquitous sign of protest against the repository.

A far larger problem is presented by highly radioactive waste, the irradiated fuel elements and the vitrified waste that results from reprocessing, which encase 99 percent of all radioactive waste – and in particular the waste that will still be hazardous even 100,000 years from now. In Germany, a final repository for this waste had been planned at the Gorleben salt dome, where many years of painstaking exploratory work was carried out. Work was then suspended for a lengthy period, before the project was shut down entirely for political reasons. It was the most modern mine in the country. Shortly before it shuttered, I was able to visit the white caverns within the salt. As a farewell gift, a geologist offered me a chunk of pinkish- orange crystal as a souvenir. “Would you like to take a piece with you?” he said, adding: “That’s Himalayan salt...well, chemically anyway.”