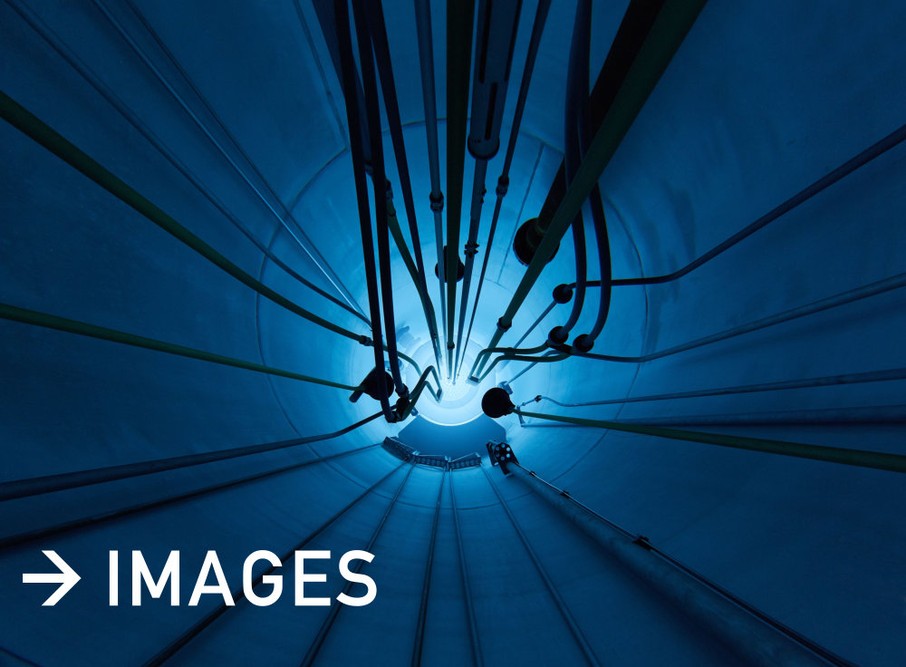 The dawn of a new scientific era of was a central promise of the Atoms For Peace programme, and much American and Soviet funding was directed towards science. The Federal Republic of Germany also invested considerable resources in nuclear research. I had never before noticed the scale and aesthetics of the landscape that resulted from this, even though I worked close to the former nuclear research centre in Karlsruhe for about two years. My first visit to the centre was a trip back in time to the 1970s. A friendly employee drove me around the huge, car-friendly plant in his old ivory-coloured Mercedes, the centre’s flat buildings topped by distinctive domes. As we drove, he explained to me the optical sins committed during of building’s energy-saving refurbishment, while pointing to the hidden reactors and partly nondescript sights along the way, such as the dissected remains of simulated meltdowns. I knew pictures from the heyday of the American Apollo programme, where dozens of engineers parked their cars directly around the rocket launch pads, and I got the impression of a very similar pioneering spirit that once prevailed here. The architecture also had its own aesthetic lines, such as the iconic atomic egg in Garching with its shell of burnished aluminium. To my surprise, all of Karlsruhe’s reactors were once covered with metal as well, or at least had a shiny dome. In the building that housed the “Karlsruhe Fast Zero Power-Critical Assembly” breeder experiment, I later discovered that this was also an aluminium cylinder, later concealed by an outer wall. The research centre’s first reactor, the FR 2, even boasts an aluminium-clad control room, which has a window to the reactor hall and is designed like a Ken Adams film set. The Merlin and Dido reactors at Jülich were wrapped in silver as well, and in Geesthacht, a circular, windowless building clad in aluminium catches the eye, the large windowed doors evidently retro-fitted into its metre-thick walls. Nobody remembered the former function of the building during my visit, but through the windows of the door a crane was visible on the ceiling – of course, this used to be a reactor.

Apart from a few facilities in Karlsruhe and Jülich, almost all research reactors served and still serve as neutron sources. A whole landscape of docked instruments and large-scale experiments is often placed around these sources, sometimes filling several halls and transforming them into technological mazes. Often, everyday life meets the opposite extreme: instruments and devices are often one-offs that have been produced in the research workshop, the result of hours of tinkering and improvisation. Insanely expensive custom-made products can be found next to penny goods from the hardware store, junk-filled offices next to sterile workspaces. Here and there you find “status symbols” in a corner, their value known only to a few people in the world. Some setups look like do-it-yourself science fiction, whilst other devices look like they’ve been brought back from the future in a time machine. A kind of pragmatism underpins the interdisciplinary aesthetic of fundamental research: even the most orderly new installation is soon covered with additions, expansions, supplementary elements and notes. I was allowed to explore the largest of these landscapes around the FRM II in Garching. In one corner there are even improvised tunnel passages leading to a hidden control point inside a large scaffolding and tarpaulin construction, a hiding place for big kids, illuminated by server lights and screens. There is even a sociable stray cat that is allowed to come in and roam around; it is looked after and of course named after Schrödinger. I always get a sense of home in such places, and share the enthusiasm of those working there.

At research reactors you can still experience the hidden magic of the atomic age: Cherenkov radiation. At nuclear power plants, it can only be seen once a year, many days after shutdown, as a pale glow emanating from brightly lit basins. Scientific swimming pool reactors, on the other hand, can be seen during operation, and the pool light can easily be switched off. In its purest form, I experienced the Cherenkov radiation at the TRIGA in Mainz, which has a special feature: the reactor can be brought into a prompt critical state, a condition that has to be avoided at all costs everywhere else. The control rods can be shot out completely from the small reactor, which then increases its output from zero to 250 megawatts within a matter of milliseconds, while emitting an intense blue flash of light. The reactor’s uranium is embedded in a special matrix. When it gets hot, it accelerates the neutrons, which can then no longer split anything. The reactivity level drops almost as quickly back to zero, and you can see a slowly fading blue afterglow at the bottom of the reactor basin. After ten minutes, the reactor has cooled down again and the next pulse is possible. To take pictures, I am allowed to mount my cameras just above the water level. Using a long cable, some electronic components and the help of the university’s research workshop, I can even trigger a camera directly from the control room. The hall light is extinguished, a countdown sounds through some crackly loudspeakers, then comes the white-blue lightning – and I am dazzled. The control rods fall back into position with a mechanical sound, while I keep looking at the slowly fading blue, just like the visitors of the “Sapphire” demonstration reactor  in 1955. I’m so fascinated by the sight of this that I don’t even think of using the flash for a self-portrait. 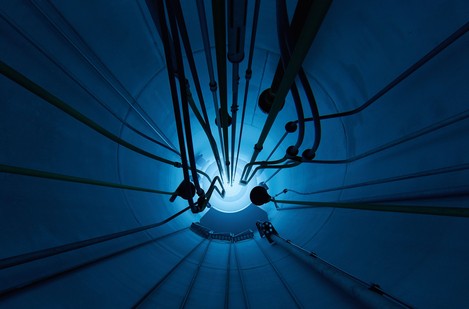