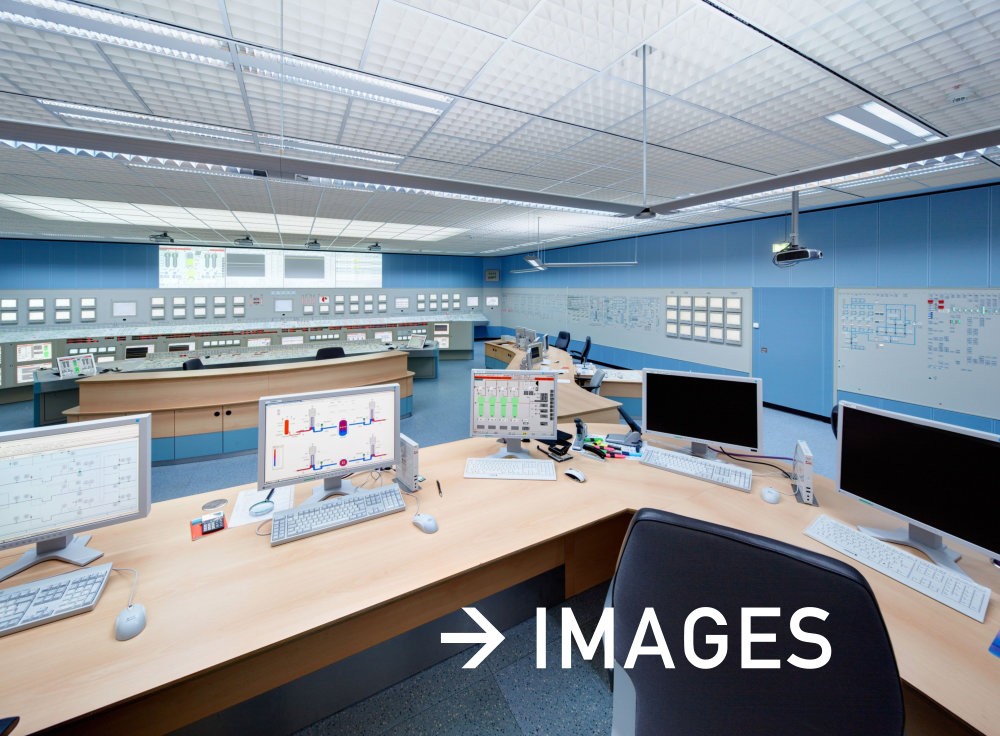 On the outskirts of the western German city of Essen is a special building. Even the fountain in front of it is somewhat unusual, as it consists of a circular basin that contains the control rods that had been intended for Zwentendorf nuclear power plant in Austria, which never went into operation. The building itself is home to the Simulator Centre, which contains replicas of control rooms in all types of German nuclear power plant. At first there were only a few general simulators, at the peak there were 14. These are not just used for vocational training purposes. A nuclear reactor is often only shut down and restarted once a year. Shift work means that workers might be involved in such an operation only every few years. All reactor operators and shift supervisors have to come to Essen every year so that the team does not forget how to handle the plant, and keeps calm even in the event of a crisis. For two weeks, they undergo training in communication and technical operation. Interestingly, the communication training was developed in collaboration with Lufthansa, whose crews need similar skills. The Simulator Centre is also home to another unusual object. After the accident in Harrisburg, a training model of Germany’s Biblis power plant was painstakingly assembled: a complete pressurised water primary circuit with an electrically heated reactor, coolant pumps, pressurisers and two steam generators. The components of the model are made of glass, so you can watch the reactor at work and see what happens in given situations. Today the model is set up in Essen, behind a glass wall in an otherwise innocuous conference room. To make it look more “atomic”, the heating rods in the reactor can be illuminated in blue.

Crucial for the facility, however, are the large simulators. Many of them resemble their originals like two peas in a pod, and even the emergency stations are there. Of course, the interiors look a bit more sterile, occasionally the carpet or ceiling colours differ. In other instances, though, details such as houseplants have been faithfully reproduced. Even the same postcard can be found pinned behind some operating manuals in both the original and the simulator. However, at the back of each room is a table where instructors can sit and simulate emergencies at will, from the failure of a tiny electrical component to a ruptured main coolant pipe or an airplane impact. “They always make us sweat a lot,” as one power plant employee told me. When I photograph the simulator of the Isar 2 plant on my first visit, the room still bears the signs of the previous exercise: the reactor was shut down abruptly, glowing pink on the screen, pressure in the containment is high, and lots of white pilot lights are flashing. In a real power plant, even a single white lamp makes shift supervisors uneasy. “Shall we turn off the light?” suggests one of the training instructors. “We can switch on a few others instead.” All of a sudden the dark, silent control room, lit only by screens and slowly blinking indicators, looks like the bridge of an abandoned spaceship. But the scene seems overly surreal: there is none of the sense of urgency that such a situation would create in real life. The instructors stand around at the back, drinking coffee.

Today there are only nine simulators left, one of them for the Dutch power station Borssele. When an actual nuclear power plant is decommissioned, its control room is preserved for many years. As time goes by, instruments that are no longer needed are replaced by grey tiles, gradually sapping the control room of its lustre. Here, at the Simulator Centre, the transformation is more drastic. Simulators of plants that have been shut down are dismantled straight away. I get the chance to witness this once. The still functioning and expensively installed machinery is taken apart and scrapped. I would have thought that technical museums would be eager to preserve such a set-up, but quite the opposite is the case. What’s left are curious spaces that are echoes of what they used to be. Instructors who have spent many years of their lives there avoid these rooms – at least that’s what my supervisor tells me during my first visit. By the time of my second visit, he’s retired.

Another, less complex type of training equipment is also disappearing: the Siemens SUR-100 educational reactors, which have been in operation since 1963. Of the 12 former SUR-100s, three are still operational today. A SUR is a barrel-shaped structure about three metres high, painted grey and with a railing on top. The core is the size of a cooking pot. Its two halves consist of PET and a small amount of enriched uranium. The lower half is held in place by electromagnets – switching the electricity off causes it to drop and shut down the reactor immediately. The maximum output of the machine is one watt, which means it hardly consumes its fuel, barely warms up and can be operated virtually forever. In the GDR there was a SUR replica at Dresden Technical University called the AKR, which, having undergone technical refurbishment, is now Germany’s most modern training reactor. In continuous operation it produces about two watts. All I want to do is photograph this AKR-2, but I’m still given a crash course in how to operate a reactor. Instinctively I had always thought that the control rods would be inserted in their basic state and pulled out at high power. In the AKR they are always kept in mid-position which keeps the chain reaction and thus the number of neutrons flying around stable – regardless of whether there are 100 or 100 million. Pulling the rods out for a short time is like pushing the throttle; putting them in deeper and you apply the brakes. After each movement I have to wait for a minute and watch the effects of my action on the screen. But I quickly get a feel for the system and how to keep it in balance. Of course, operating a commercial reactor is a very different story, with its arrangement of fuel elements of varying age, the burn-up since the last fuel load and many other factors, but the principle is the same. And so I’m a little reluctant when the head of the reactor finally asks me to pull out all three control rods as far as possible. Somewhat perturbed, I follow the exponential increase in the chain reaction on the monitor. The curve becomes steeper and steeper and breaks through the two-watt threshold. Two point one. At two point two watts, a warning signal sounds in the hall. I stare at the experts like a child who’s been told by an adult to do something bad. Two point three, two point four. There’s a slight impact noise, the lower half of the core has fallen off. Scram, reactor shutdown. In a real-life nuclear power plant this would be a reportable event and might generate some political fallout, but at the AKR it just gives the reactor manager a satisfied expression.